In their recent work, Lehrer and Lin shed some light on the black box of party behavior. The authors ask under what conditions the broad-appeal strategy works. This phenomenon describes voters’ tendency to vote for ambiguous parties. Sending equivocal policy signals to voters, a party becomes attractive to more voters with diverse policy interests. If a party has ambiguous party platform, voters tend to underestimate the policy distance between their own position and the position of the party. Therefore, the broad-appeal strategy is a winning strategy to broaden up electoral support. Based on the previous work by Somer-Topcu (2015), Lehrer and Lin argue that ambiguous party policy stances only lead to an underestimated ideological distance between voters and parties if a party presents itself as united. With their theoretical extension, Lehrer and Lin distinguish two types of broad-appeal strategy in practice: First, a party can take an ambiguous position with the intent to highlight different parts of their manifesto or ideological stance to respond to different sub-constituencies. This leads to a perceived cohesive party behavior by voters. Second, several party factions and intraparty groups fight against each other with separate policy positions. Voters observe disjointed policy platforms within party and are confused about what exactly the party stands for. The probability to vote for such a party declines. In consequence, the broad-appeal strategy should only work for united parties. Voters perceive intraparty conflicts and do not ‘feel closer’ to a divided party.

To test their argument, Lehrer and Lin use survey data from the German Internet Panel (GIP) which provides information on respondents’ ideological self-placement, the perceived ideological position of political parties, and the perception of party unity. In the first step of a two-stage estimation, the authors analyze the absolute perceived distance between the respondents’ and parties’ ideological position to examine the voters’ representation level. A three-way interaction term of the average perceived distance between voter and parties (as a proxy for the actual policy distance), the perceived party unity, and a dichotomy variable which captures a (non-)ambiguous party constitutes the dependent variable.[1] Lehrer and Lin confirm that the broad-appeal strategy works very well for cohesive parties (Figure 1). Respondents believe that parties are ideologically closer to them if parties show a cohesive behavior (right panel). For parties with unambiguous policy stances (left panel), the distance between respondents and parties declines only slightly with increasing party unity. This implies that voters observe the conflict within parties and do not misunderstand the true policy intentions.

Figure 1: Interaction effect of perceived unity and ambiguity on perceived distance with 95% CIs. 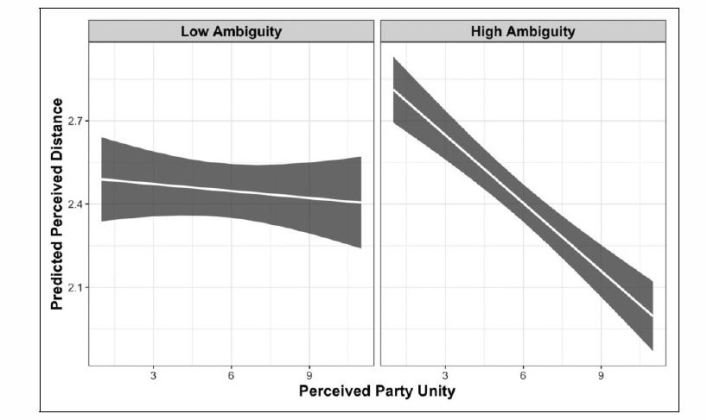 In the second estimation step, Lehrer and Lin try to explain the respondents’ vote choice with the predicted perceived distance from the first step. Independent of the strong explanatory power of party identification, they find that respondents’ perceived distance has a significant negative effect on the willingness to vote for the party. Therefore, as the distance declines the probability to vote for the party increases. Furthermore, Figure 2 supports the importance of party unity to explain the broad-appeal strategy on the individual level. On the one hand, the respondents are more likely to vote for more cohesive parties if they are sending ambiguous policy signals (right panel). On the other hand, the impact of party unity is marginal if parties have a clear policy program (left panel).

Figure 2: Interaction of perceived unity and ambiguity on voting behavior with 95% CIs. 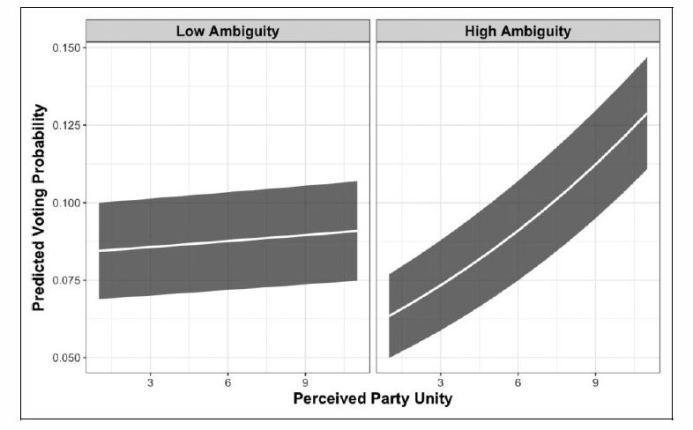 To sum up, Lehrer and Lin’s impressive work shows that intraparty politics is an important factor for the success of political parties. Parties can boost their electoral support through equivocal party positions but only if the party presents itself as united. Next in the line of research, it would be interesting to see if the results also hold in other countries than Germany under different institutional conditions. Furthermore, I wonder how to address the possibly spurious relationship between the dependent variable perceived distance and the independent variable perceived party unity. Given the strong explanatory power of party identification, it is likely that the respondent ‘want’ the native party to be ideological close to their position and to appear in a cohesive way. Independently, Lehrer and Lin bolster the knowledge about party and voter behavior, and intraparty cohesion.

By Sven Kosanke in February 2019

Sven Kosanke is a a doctoral researcher at the Chair of Comparative Politics at the University of Greifswald. In his thesis, he examines the intervening effects of electoral systems on intra-party cohesion. His research has been published in Electoral Studies.

[1] The theoretical framework and the following verification of the corresponding hypotheses based only on the interactive relationship between party unity and the equivocal party stance. Why is it important to put the average distance important into the interaction term and not only use this variable to control for the actual distance of parties and the median voter?

The central objective of this blog is to offer accessible academic research and commentary on various topics related to electoral systems and representation. Beyond research notes, we provide short literature reviews on recent publications in the field. We are committed to communicate social science research in a manner that enhances public as well as scientific understanding and debate.